If you like anything and everything about snow, you may be inspired by the meaning of the word Himachal. ‘The land of snows,’ the meaning, is adequate to give you an idea of what to expect here. Here are some places to visit in Himachal Pradesh –

The small town of Dalhousie, Khajjiar is generally known as the mini-Switzerland in India. This place is a combination of lakes, landscapes, and forests. It is said to have attracted a lot of kingdoms, including those of Rajputs as well as Mughals.

This is one of those hill stations of Himachal Pradesh which is attracted to many people to adventurous activities.

Bhagsu nag Temple is one of the popular ancient temples, which is located at about 3 km east of the main city of McLeodganj and around 11 km from Dharamshala. It is surrounded by the famous Bhagsu Falls and is considered to be a popular place of Hindu pilgrimage. An annual fair is conducted in the month of September at this temple which attracts tourists from across the globe. 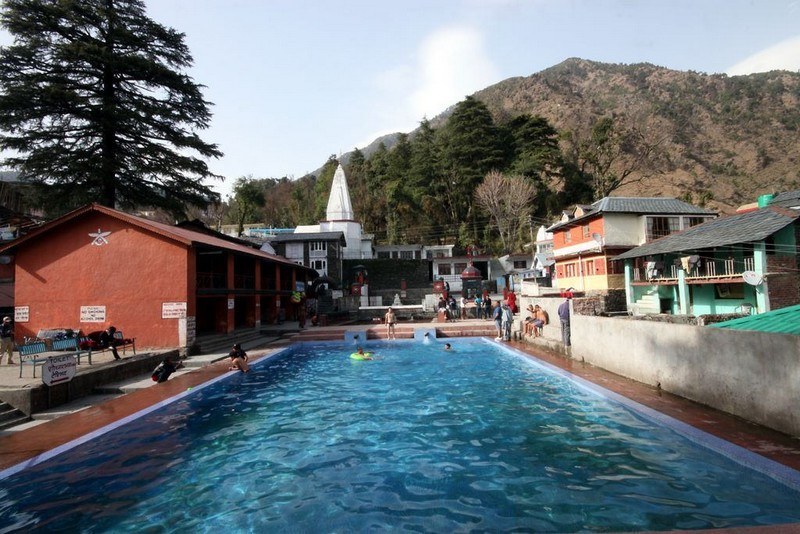 Kali ka Tibba is a temple dedicated to the goddess Kali. It is located at the top of the mountain Blossom, which has been named after the Rajmata’s Cottage. The place provides a beautiful view of the surrounding Shivalik Range and the Choor Chandni Peak. Furthermore, travelers can enjoy trekking to the temple, during which they can rare species of animals.

The Renuka Lake, measuring around 672 m in length, is considered to be the largest natural lake in Himachal Pradesh.  Renuka lake looks similar in appearance to a reclining woman. It is also known as the embodiment of Goddess Renuka and is located near another lake, dedicated to her son, Lord Parashurama. Boating facilities are available in both the lakes. The Renuka Temple is also situated in proximity to these lakes.

Dharamshala Cricket Stadium (DCS), an internationally renowned stadium, is the home ground of the Himachal Pradesh State cricket team. It is considered to be one of the most attractive cricket stadiums in India due to its natural backdrop.

Few international and Ranji cricket matches are held here on an annual basis. From this cricket stadium, travelers can view the beautiful snow-capped mountains of the Dhauladhar mountain range. 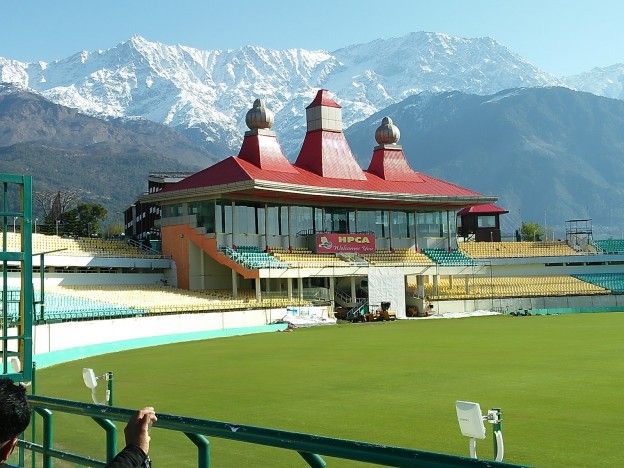 The Sankat Mochan Temple is one of the most popular worship places in Shimla. The temple is located in the midst of lush green trees just below National Highway 22.

The Sankat Mochan Temple houses the idols of Lord Shiva, Lord Rama and Lord Ganesha in separate complexes along with Lord Hanuman in the main temple. The temple of Lord Ganesha is designed in the South Indian architectural style. 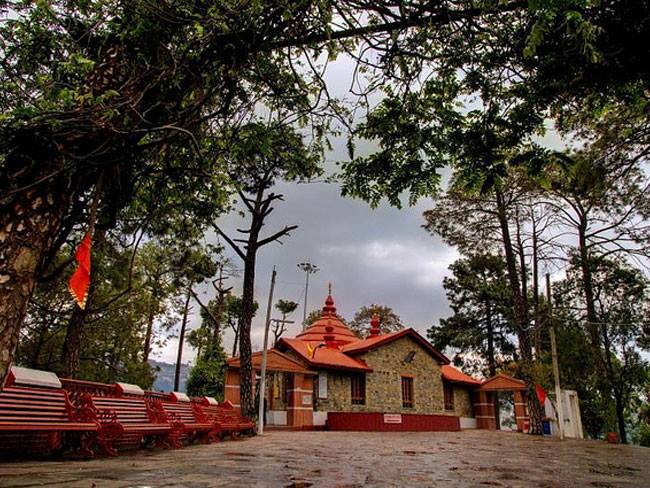 Dalhousie is one of the most popular hill stations in Himachal Pradesh and is built on and around five hills: Kathalagh, Potreyn, Terah, Bakrota, and Bhangra. Bordered by peaks, and punctuated by lakes and waterfalls, it is known as the Little Switzerland of India.

Chantal is one of the most spectacular places to visit in Lahaul, Spiti Valley. The name has been derived from its crescent moon-line shape. The crystal blue water surrounded by lush greenery and snow-capped mountains makes it an idyllic destination for camping and trekking. 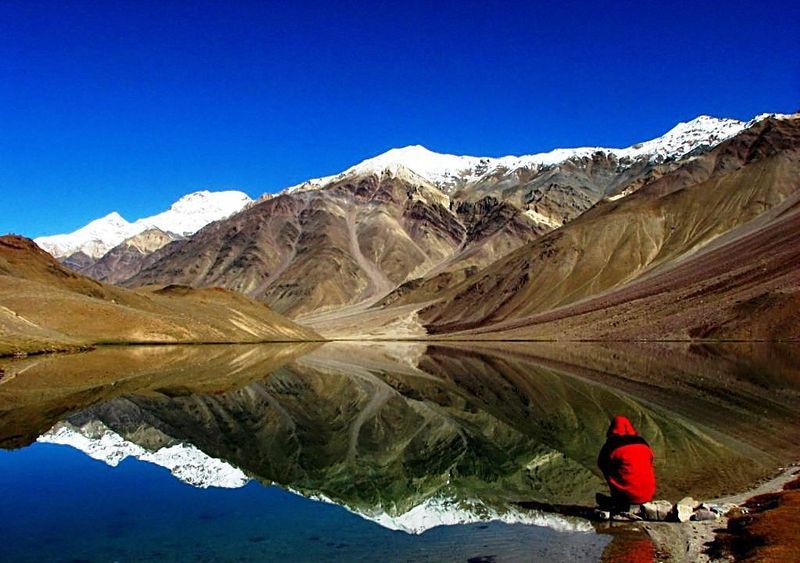 Bijli Mahadev Temple is a huge temple that is dedicated to Lord Shiva. This temple is located at beautiful views of nearby mountains and residential houses in the valley. Often called the ‘Temple of Lightning’, this temple is famous among locals and tourists for the legend behind its Shiva Lingam.

It is believed that the temple possesses a Shiva Linga, which had broken into pieces due to lightning. The broken pieces of the Shiva Linga were bound together by the temple priest using butter. This activity repeats itself once every year. To reach the temple, tourists are required to trek for 3 km on foot through a path that is lined with pine trees.

Chamunda Devi Temple is one of the prime religious centers, which is also counted among 51 Shakti Peethas located. The shrine dedicated to Goddesses Durga or Chamunda provides an ideal ambiance for meditation and seeking the blessing of the Goddess.

Chamunda Devi Temple complex features a Kund (a pond), which is believed to have sacred water. Besides, there is a cave-like scoop on the backside of the sanctum which represents Shiva Lingam. Paintings of several Gods and Goddesses located in the temple complex draws the attention of the tourists.

Rahala Falls, a popular picnic spot, is situated at the starting point of the Rohtang Pass. Water dripping from precipitous rocks and glaciers serve as the source of the falls. The area around the waterfall is marked by thick deodar forests and birch trees. Snow-capped Himalayan peaks mark the background of the waterfalls.

There are two hot springs in Manikaran, that are both associated to holiness – the hot spring at the Sri Guru Nanak Devji’s Gurudwara and the hot spring in the River Parvati. It is believed that people after taking a bath and drinking the water of these hot springs attain salvation. 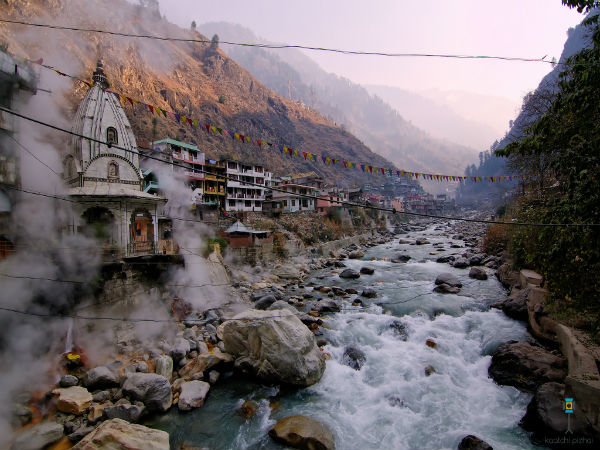 Suraj Tal, which literally means the Sun Lake, which is one of the most photogenic places to visit in Lahaul and Spiti. Located close to Baralacha Pass, this spectacular lake is attracted mostly by nature lovers, ardent trekkers, and photographers.

Jagatsukh, located at a distance of 6 km from Manali, is the erstwhile capital of Kullu. An ancient Shiva Temple, built in the ‘shikhara’ style is the prominent highlight of the village. A small shrine of Gauri Shankar and the chalet-roofed temple dedicated to Goddess Sandhya Devi are some of the numerous old temples that dot the village.

Tara Devi Temple, dedicated to Goddess Tara, is one of the main temples of the region. The main deity of this temple is Goddess Tara, who is regarded as an important goddess of Tibetan Buddhists. Goddess Tara is also considered as one of the nine sisters of Goddess Durga. It is located on the Tara Parvat and is said to be more than 250 years old.

Locals of the region believe that the idol of Goddess Tara was brought to this temple by the Sen Dynasty king from West Bengal. The idol is made of wood and has been installed as per the Vaishnava tradition. Special pooja is conducted at this temple on the day of Ashtami during Sharad Navratri. Malana is located below the Chanderkhani Pass. The hamlet comprises a small cluster of around 200 stone roof houses. The temple of Jamlu, dedicated to the spirit of village God Jamlu, is a highlight of the village.

Located in the interior of the Himalayas, the village is connected to Kullu by three mountain passes. Badoo Mela in August and Fagdi Mela in February are the two main festivals celebrated in the village.

Key Monastery or Kye Gompa is one of the most popular places to visit in Spiti valley, located in the Kaza region.  Key Monastery is one of the biggest gompas known for the stunning Buddha shrine, ancient books, manuscripts, and murals.

One of the top places to visit in Spiti, Trilokinath temple holds a great value in the hearts of both locals as well as tourists. Located in Tunde village, the temple sits on a cliff and offers amazing views of the surroundings.

The Manali Gompa serves as an important gathering place for Buddhists from Lahaul, Spiti, Kinnaur, Ladakh, Nepal, and Tibet. Built-in the 1960s, the new monastery is famous for its wall paintings, Chortens and a large statue of Lord Buddha.

If one of your main goals of coming to Himachal Pradesh had been to see snow, your trip would be incomplete without visiting Kufri. Kufri is snow-laden throughout the year and it’s a perfect destination. Nature hiking and trekking tours start from here and in winters it understandably becomes a hotspot for skiing. 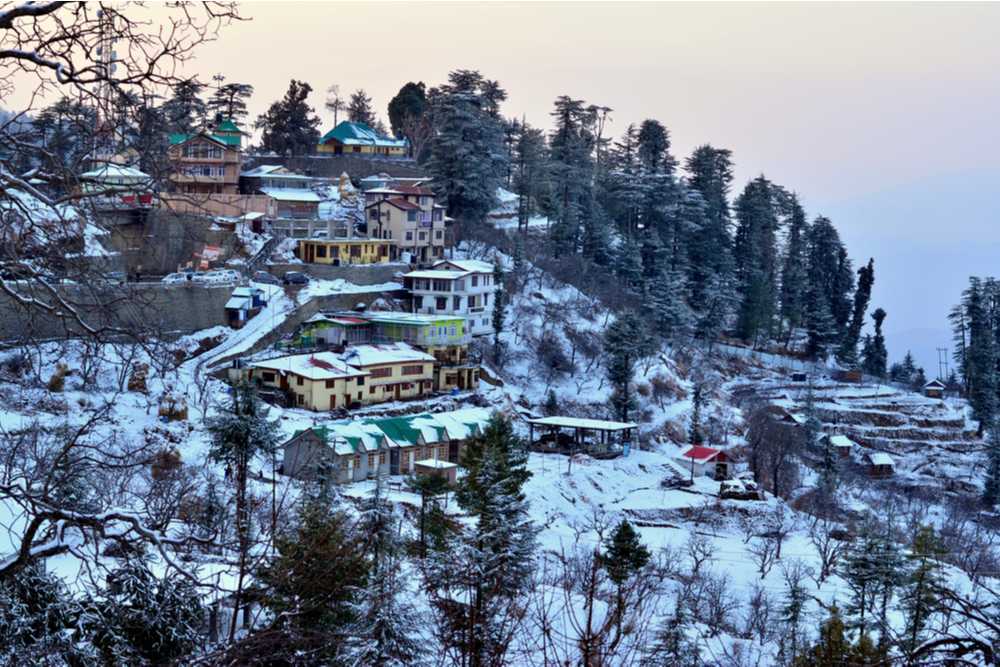 One of the major highlights of the trek is the visit to high altitude   Chandratal Lake in Spiti. Hampta Pass located in Himachal is one such destination that makes for perfect trekking for every adventurer.

The temple is dedicated to Lord Rama. There are many religious activities like Dussehra that brings huge crowds of tourists and pilgrims. During festivals, the temple is decorated with lights, which gives a different appeal.

This temple is very old and popular in Himachal. Developed in a blend of Pahari and Pyramidal style, this temple is truly believed to be the safeguard of the entire valley. Many tourists visit here to enjoy the Dussehra festival and capture some unforgettable moments with them. 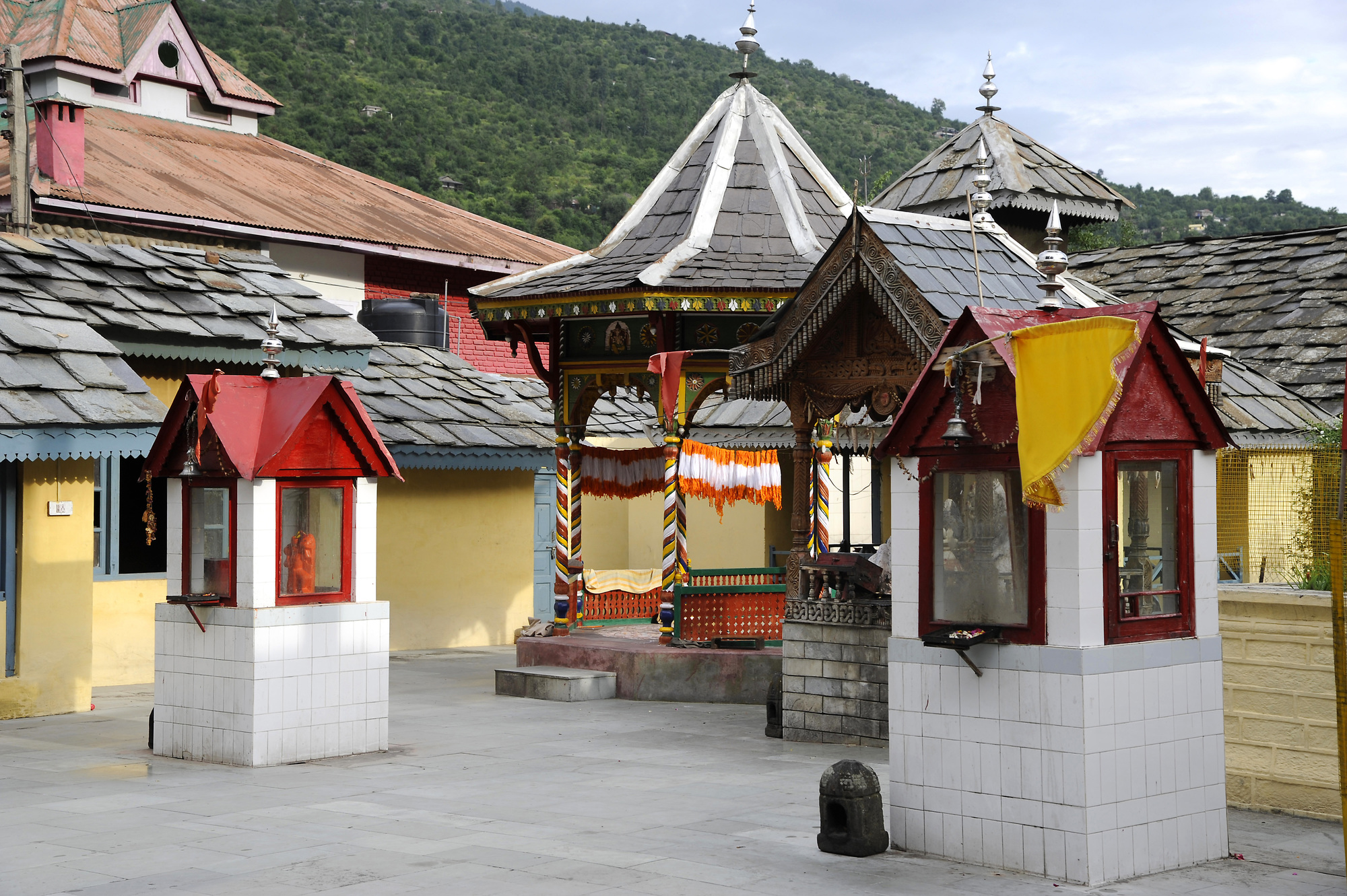 Our vision: To permote new trend of tourism with accompany by old concept of culture, tradition and heritage.  This is our vision for our tourists.